Published 2019-03-02
The Bruce Librarian reviews one of the latest additions to the Bruce bibliography.

There is by now no shortage of books where Bruce Springsteen fans share their memories and feelings about their idol. “Bruce Springsteen: Our Reasons to Believe” by Carole Tuszynski from way back in 1986 set the tone and was followed in the 2000’s by Lawrence Kirsch’s “For You” and “The Light in Darkness”. There was even a movie built around the same concept: the officially sanctioned “Springsteen & I” documentary from 2013. 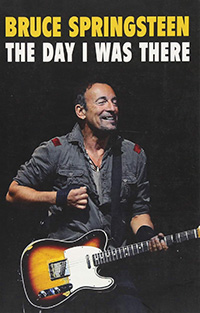 So does the world really need another book of tales by Springsteen fans? Well, a guy named Neil Cossar thought so. His book “Bruce Springsteen: The Day I Was There” was published in 2018 and is an almost 400-page collection of fans describing the shows they went to and other encounters with Bruce. It covers Springsteen’s entire career from the Castiles days in the late Sixties all the way up to Springsteen on Broadway. That makes it perhaps the most extensive documentation of Bruce Springsteen’s live shows ever put to print.

Of course, as someone who approves of documenting everything having to do with Bruce and who once had an ambition of filling Greasy Lake’s concert database with eyewitness accounts, press clips, YouTube clips of every single performance Bruce has ever done, I can only compliment Neil Cossar on his achievement. Collecting, organizing, editing, lay outing that many contributions from fans all over the world must have been a huge undertaking.

When that is said, I do not recommend reading “The Day I Was There” from start to finish. This is a book you want to keep on your coffee table for a few months and browse whenever the mood strikes you or when you’ve got some Bruce on the stereo. You want to look up entries about shows, locations, or periods in Bruce’s career that most interest you and read those.

Another thing you want to browse for is the names of the several “famous” fans that have contributed to this book and whose stories are often among the more interesting entries. Kingpin of the famous rock ’n’ roll tours of the Jersey Shore and long-time Bruce reporter, Stan Goldstein, has several entries about some of his countless shows. UK uber fan Dan French’s story about his experiences during the 1981 European tour is priceless. Not to mention “selfie girl” Jessica Bloom, whose selfie with Bruce in Sydney 2017 went viral not just in Springsteen fan circles, but on the entire internet.

And then there are the actual famous people: Courtney Cox talking about filming the “Dancing in the Dark” video, Scottish session player Andy Murray’s amazing multiple page account about seeing one of the legendary Bottom Line shows in 1975, author Nick Hornby, singer John Prine. Heck, even David Bowie has an entry in this book, which I think probably means that some of the stories were not written specifically for “The Day I Was There”, but rather were borrowed from other publications. That most likely goes for a few entries by actual E Street Band members as well. An account by Max Weinberg can be found in the book, as well as Nils Lofgren and Clarence Clemons.

Perhaps the highlight of the book is a story by Jane Shapiro about the 1980 St. Louis show. Or, it’s about her friend Steve and how he invited Bruce to come home and visit his family. The story is legendary among fans, but this is the first time I remember reading it from other than Bruce’s point of view and getting the whole background story.

Altogether, the book is a hotchpotch of all kinds of contributions, from the several-page long, well-written, deeply fascinating and personal tales, to the very insignificant, short, blandly written statements of someone having been to a show – and sometimes not even that - where you could have used a little more critical selection.

The worthwhile contributions, fortunately, are in the clear majority, which makes “The Day I Was There” an entertaining and often emotional read, especially at a time like this when your last show is but a memory and you really, really start to feel the itch to be out there again among other fans, following the man and his band.