Book review: For You

I get a lot of inquiries through the Greasy Lake mailbox about all sorts of things. Some people want to know how to invite Bruce to their wedding, others want to offer me affiliate deals, and still others just want to know how to get a bootleg recording of a show they've been to. So when Lawrence Kirsch contacted me a couple of years ago regarding a book he wanted to publish, it wasn't anything too much out of the ordinary. Lawrence was looking for a way to tell the fans that their input was needed. His book was going to consist of tales from fans about their concert experiences and meeting Bruce, etc. I offered to mention it on this news page of Greasy Lake and post something on the message board, but otherwise didn't think much of it. Maybe I even had a slight feeling that this project wasn't likely to succeed. Fans these days have loads of outlets for their Bruce stories. Contributing to a book may seem a little "last century" to a lot of people. But Lawrence seemed full of optimism and even asked if I would like to submit a story. Being the nice person that I am, I agreed to do it and wrote a piece about my close encounter with Bruce at the Stone Pony in 2001. I was a little surprised when he then asked me to send it to him in Danish, but again I agreed. 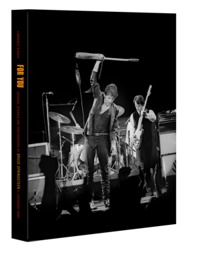 Well, fast forward a year or two where I didn't hear much about the project and, if anything, thought that it probably wasn't going anywhere. But last summer I got a message from Lawrence saying that the book was in its last stages of being completed and would be published in October. I think this may have been the first time I truly realized Lawrence actually meant business and that he was more than just another fan with a good idea that would never be realized. Well, to make a long story short, when I received my own copy a few months later, the last shred of doubt was removed. This was an awesome looking, beautiful hardcover book full of amazing stories and no less amazing pictures. The best part is that this is not just another run-of-the-mill Bruce biography like we have seen so many times. This book is indeed made up 100% of fan tales from around the world and with loads and loads of never-before seen pictures, many of which are among the best shots of Bruce you are likely to see anywhere, including several by one of my personal favorite Bruce photographers, Rene van Diemen.

I admit, I haven't read the book cover to cover yet. So far I have enjoyed opening random pages and reading whatever story I would come across. What strikes me every time is the enthusiasm that all the contributions radiate. When you spend a lot of time hanging out at Bruce message boards where every aspect of Bruce is analyzed and nit-picked over and over, it's actually refreshing to read these stories where genuine Bruce passion is all-dominating. In other words, if hero-worshiping is not your thang, this book probably isn't for you. You won't find anyone questioning why "Let's Be Friends" was included on The Rising (at least I haven't seen it yet) or why we have to hear "Bobby Jean" at every show. That's not the purpose of the book at all. It's a tribute to Bruce and a tribute to fandom and all the blessings it brings.

We have seen several new Bruce books in the last few years, including another long-awaited book by official Springsteen biographer Dave Marsh and a lavish book about the E Street Band. I bought them all, because as a librarian by profession, I see it as my holy duty. But if you are going to buy just one of the current Bruce books, I won't hesitate to recommend getting For You. Dave Marsh's On Tour is merely a rehash of himself. Robert Santelli's book about the E Street Band is gorgeous, but doesn't offer a whole lot of new insight. For You is a much-needed fresh breath in the Bruce bibliography and essential to any serious fan. My sole gripe is a personal one in that the story I submitted was published only in its Danish incarnation, which means hardly anyone who reads the book will understand my pearls of wisdom. To compensate for that, I have posted the English version as an eyewitness account in the Stage section of Greasy Lake where you can read it. After that, go read more about the book on www.foryoubruce.com.